Kerenhappuch Norman Turner, my 6th great-grandmother, had a son and seven grandsons fighting in the Revolutionary War. According to legend, this is what she said to them as she sent them off.


I expect you to fight, for it is your duty; but I cannot let you go until you give me your promise, each one of you, that you will keep me informed of your whereabouts and your needs, and send for me if you are wounded.
—The Delineator, January 1917
http://www.homeofourfathers.com/lisbeth/dockerenhappuchnormanbio1.htm

The sons and grandsons promised. I'm really glad they did, because I'm descended from one of those wounded soldiers,  James Turner Smith. 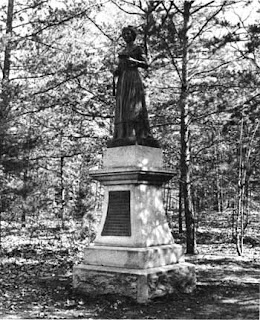 There are a lot of stories about Kerenhappuch. She is said to be descended from the Plantagenets through her mother, Frances Courtney, but a 15-year search has turned up only circumstantial evidence of connection to the noble British Courtneys.  Kerenhappuch is said to have been born about 1690 or 1715 and died falling off a horse about 1805, at the age of 90 or 115, depending on who you believe.

This is the tale that has come down to us. There's a lot of truth in it, I'm sure, but we'll never know exactly how much.

"...James Turner Smith volunteered at seventeen to fight in the Revolutionary War. He was critically wounded at the Battle of Guilford Courthouse in North Carolina and lay neglected for hours with his thigh completely shattered. Finally he was moved to a log home near the battlefield, where doctors planned to cut the leg off. But Smith would not consent to the amputation. As word of the bloody battle spread to Maryland, his grandmother Kerenhappuch Norman Turner, 90, rode all the way on horseback to be with him, where she nursed him and others back to health. She bored holes in large tubs mounted to the rafters above him. The tubs were kept full of cool water and allowed to drip, continuously cleansing his wound. Today there is a monument at Guilford Battleground to the memory of Kerenhappuch Turner's spirit and courage.... It was a year before he could be moved, but James Turner Smith recovered and married Constantia Ann Ford. Of their five children, only James Norman and his twin Charles Allison survived to adulthood."

There's a good long article on Kerenhappuch at North Coast Muse. It's called "Who are your people?" and you can read it at http://sally1029.wordpress.com/2011/04/12/who-are-your-people/

See also
http://www.ronulrich.com/rfuged/nti01480.htm
American Monthly Feb. 1893, pp 205-206, Article by Mrs. Theodore Whitfield (this may be the original of the quoted article in Who Are Your People? above)